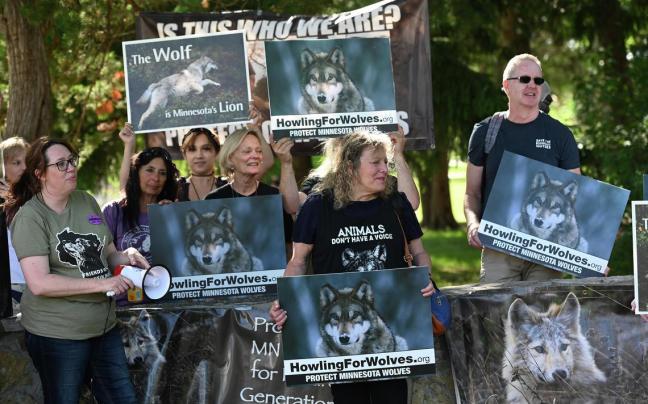 Last Tuesday, the U.S. Fish and Wildlife Service held its only public hearing on the Trump administration proposal to end federal protection for nearly all gray wolves in the lower 48 states in Brainerd, MN.

Prior to the public hearing, dozens of wolf activists gathered at nearby Gregory Park to oppose the delisting proposal. The rally featured speakers and chanting advocates with signs and wolf apparel. 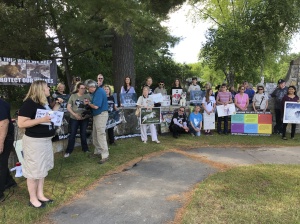 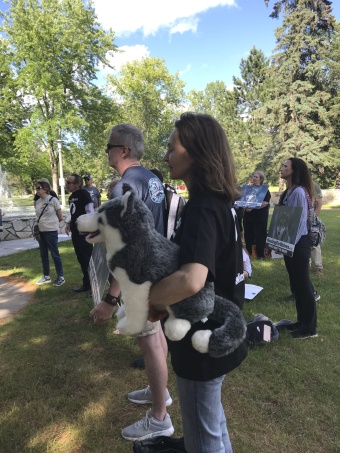 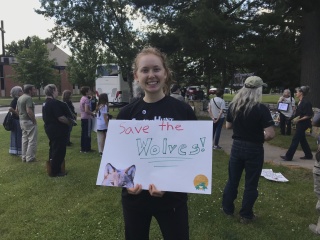 “With such strong public support for wolves, the Trump administration should scrap its wrongheaded plan to remove these critical protections,” said Collette Adkins, carnivore conservation director at the Center for Biological Diversity. “Americans don’t want to see these magnificent, imperiled animals cruelly trapped or gunned down for sport.”

The Fish and Wildlife Service is providing just one public hearing on its nationwide wolf delisting proposal. At the start of the hearing, scores of people had already signed up to testify. Because of Brainerd’s rural location, many people drove long distances for the opportunity to participate.

Video Footage of the Brainerd Rally and Public Hearing

“Without federal protection, so many wolves will suffer and die under hostile state management. In Wisconsin we could lose two-thirds of our wolves, where they’d be targeted with cruel methods like the state-sanctioned blood sport of hound hunting.”  – Melissa Smith, Friends of the Wisconsin Wolf and Wildlife

More testimony from Friends of the Wisconsin Wolf and Wildlife:

“With state management comes senseless wolf trophy hunting, which is a death sentence for wolves,” said Maureen Hackett, founder and president of Howling For Wolves, a Minnesota-based wolf advocacy organization. “Killing wolves harms their pack structure and genetic diversity. With federal protections, we can ensure survival of wolves for future generations.”

In March, the Fish and Wildlife Service announced plans to remove federal Endangered Species Act protection from all gray wolves in the contiguous United States, except Mexican gray wolves.

If finalized, the plan would allow trophy hunting and trapping of wolves in some areas, including Minnesota. This would hamper wolf recovery across the lower 48 states. The plan would likely prevent wolf recovery in the Adirondacks, southern Rockies and elsewhere that scientists have identified as suitable wolf habitat.

Last month a coalition of organizations submitted nearly 1 million comments opposing the proposal to remove wolf protection. This is the largest number of comments ever received by the federal government on an Endangered Species Act issue in the law’s 45-year history.

The Service has extended the formal public comment period on the delisting proposal until July 15. There is still time to submit your public comments HERE.

The Service is holding just one public hearing on its proposal, even though it affects wolves across the country. In 2013, when the Service similarly proposed nationwide removal of wolf protections, the agency provided four public hearings, including in major urban centers.

A poll released last month shows the majority of Americans oppose the proposal to remove wolf protections. The poll, done by Public Policy Polling, surveyed 555 registered voters in early May.

Earlier this month the Service released peer reviews written by top wolf scientists. According to the peer reviewers, the agency’s proposal contains substantial errors and misrepresents the most current science regarding wolf conservation and taxonomy.

2 thoughts on “COALITION OF GRASSROOTS GROUPS HOWLS TOGETHER AT WOLF DELISTING HEARING IN BRAINERD, MINNESOTA”

To advocate for wolves and other imperiled wildlife in Wisconsin and the Western Great Lakes region.

Friends of the Wisconsin Wolf & Wildlife formed in response to the wolf hunt and expansion of hunting and trapping in our state parks. Our mission is to advocate for Wisconsin wolves and wildlife by bringing diversity, science and democracy to wildlife policy.